Today I’m delighted to be taking part in the blog tour for Patrick Redmond’s latest psychological thriller The Night Visitor. Gripping and imaginative with a paranormal twist, I was hooked after the first few paragraphs and resented the need to stop reading in favour of sleep. If you’ve read any of Redmond’s other books, this baby will not disappoint. 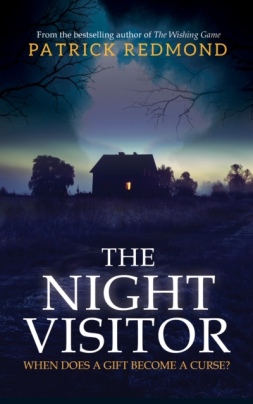 When does a gift become a curse?

Meg has a gift. She can change lives. But when tragedy strikes in childhood she vows never to use it again. Now an adult, she is living in Cornwall; a place where the elements themselves have a life of their own. When they call she refuses to listen, fearful of the dark places where her gift can lead.

But the dead will not be silenced. They are stronger than her. And now they have chosen she is powerless to escape…

I am absolutely over the moon to be taking part in this blog tour, and on day one to boot! Having read The Wishing Game a while back, I knew that I was a fan of Redmond’s writing going in to this. So I will make my bias known up front. But with that being said, the story was so dang imaginative and well thought out that any of my presumptions about what to expect were thrown out the window and I was left hanging on the edge of my seat the whole way through.

I loved the premise of the story – a young girl who can see the dead, who tries to help them find their peace, and has to come terms with how her abilities set her apart from the rest of the world. Then fast forward to adult life – successful in business but personally in tatters. I found the bits that Meg worked the hardest to repress about herself were the most endearing, and that her tenacity and denial were almost contagious. Now throw in the loss of Meg and Grace’s mother, the sheer insanity that was their father, and the slow release of the details surrounding Grace’s death. UGH, so good! I was as drawn into the personal elements of the story as much as the action of Meg’s ghost in Cornwall.

And let’s talk about that for a minute. I felt for Meg when she first started seeing the signs that her abilities were coming back to the surface, and the fear of opening herself up to that life again. I didn’t know whether or not the clues being left for her were for better or ill, and genuinely had no idea how the historic narrative was going to end or how it was tied to Meg’s story until the closing chapters. Even though the crimes were in the past, and finding the truth seemed almost impossible, I was enraptured the same as any intense investigative mystery. The conclusion was entirely different than how I thought it would be – which is just how I like ’em – and was the perfect tonic to the intensity of those chapters leading up to the final moments in Meg’s quest to save her ghost.

Now throw in a moody artist who pushes Meg to confront her ghosts rather than run from them, the quintessential English pub, and some unpredictably rugged coastal landscapes and you have the perfect storm. Although, I might loose my shit if a neighbour randomly burst through my front door after I feel down the stairs… I would be thankful, don’t get me wrong, but I would have been way less calm with a stranger entering my home!

The writing was exceptional, and never once felt repetitive. I enjoyed the breadth of the characters, the portrayal of the ghosts, and the approachability of the language employed throughout. The pacing was steady, building to a difficult-to-put-down crescendo, and although there’s enough action to pull you through it never feels rushed or like important details have been left out. I really enjoyed how Meg’s perspective evolved as she aged, and how those chapters where Meg and Grace were children actually felt as those they were being seen through the eyes of child rather than as an adult looking back. And even though there were some paranormal elements to Meg’s story, they never felt outlandish or impossible.

Steeped in discovery and distraction, routine and chaos, The Night Visitor is a tale of constant juxtaposition and endless revelations. It’s the kind of book that will capture both the heart and the imagination, and leave you wanting more. I would absolutely recommend this book – and with Halloween right around the corner it should go on the read-right-now pile rather than the TBR. If you enjoy mysteries, crime drama, and a touch of the other-worldly this one is absolutely for you!

Patrick Redmond worked as a City solicitor before publishing his first psychological thriller “The Wishing Game”.  Having long been interested in criminology his books focus on the psychological aspect of crime and the disturbing ways in which a strong mind can manipulate a weaker one.  Patrick lives in West London.  In his spare time he likes socialising, watching films, eating pizza and making half-hearted attempts to keep fit.

Many thanks to Tracy Fenton for inviting me to join in this tour, and to Patrick Redmond and Manatee Books for providing a copy in exchange for an honest review.

I feel like I owe you an explanation. I haven’t posted in just over a month, and in that time I read a grand total of only 5 books! Obviously, this isn’t my normal. And for some reason I feel like I’ve let you down. But, I have a long winded story and some pictures to make up for it.

You see, the fellow and I have been looking to leave the city behind and move out to the country for a fair few years, and starting in August everything started to fall into place. Naturally, this didn’t go smoothly – because when does it ever?! We put an offer on a place, it was accepted and we were over the moon. So, we listed our house, cleaned like mad and started accepting showings. But, just a few days later they accepted a backup offer, and we withdrew as they wanted us to firm up whilst foregoing all inspection – BIG RED FLAG. Turns out walking away was the best thing we could have done as we heard from the final buyers who shared some horror stories of asbestos ceiling tiles, a cracked foundation, an unportable well, and defunct septic system. We were lucky to get out when we did!

But, that doesn’t change the fact that we had listed and stared showing our house. And to make things even more dramatic, within 48 hours of withdrawing from the first property, we had accepted on offer on our house in the city – WITH A 30 DAY POSSESSION. What in the world were we thinking?! So, cue the packing, cue the panic. Because here we are approaching fall when the acreage market is soft with nowhere to go. Somewhere, somehow, in the heavens the stars aligned. Because 5 days later our dream property (that had been conditionally sold earlier in the summer) suddenly came back on the market. We went, we saw (the view pictured below), we offered on the spot…. and settled on an even shorter possession day than the one our home, only 17 days away.

WTF were we thinking?!

Oh, and did I mention that my fellow works Shiftwork away? Yeah, one week at camp, one week at home. Of those 17 days before we moved, he worked 14. My brain hurt. But I packed the entire house in just under three weeks, arranged movers, cleaners, and an army friends and we hit the road to head an hour south.

But first we had to paint (I did all of that), move two walls (he handled that), repair some shoddy drywall and plaster work, remove oodles of barbed wire fencing (thanks mom & dad!), ran electrobraid and installed gates to make the property horse safe. And the work isn’t done yet either, we still have baseboards and trim to replace, we just finished installing 5 out of 8 needed light fixtures last night, we need to rewire some of our switches because we have no clue what they’re attached to, I am halfway through installing the built-in desk and shelving in my office.

It’s all been worth it though, and were delighted to leave the hustle and bustle of city life behind. Our views are killer, the nights are quiet, and I am finally getting back to reading at my regular rate. Tomorrow I will be taking part in the blog tour for the fabulous paranormal mystery The Night Visitor by Patrick Redmond, and have reviews ready to go for My Real Name is Hannah, Crush, and The Gilded Wolves. It might take a little while for me to figure out this new balance, but I promise I’ll get there eventually.

Love you my nerds, and I’ll be back at it tomorrow!