Okay, once more I’m breaking my rule regarding reviewing in order. Enter Courtney’s War by Wilbur Smith and David Churchill. Having never read anything in the Courtney series, and jumping in at #17, I was expecting for this sucker to take some serious intuition and back-story sleuthing in order to make my way through it – wrong! Instead it turned out to be a fantastic stand-alone packed with drama, back story, and a strong as hell female protagonist. Basically, I loved it! 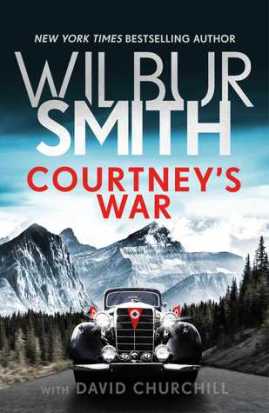 The brand new Courtney Series novel, and the much-anticipated sequel to the global bestseller WAR CRY

Paris, 1939 -Torn apart by war, Saffron Courtney and Gerhard von Meerbach are thousands of miles apart, both struggling for their lives.

Gerhard – despite his objections to the Nazi regime – is fighting for the Fatherland, hoping to one day have the opportunity to rid Germany of Hitler and his cronies. But as his unit is thrown into the hellish attrition of the Battle of Stalingrad, he knows his chances of survival are dwindling by the day.

Meanwhile Saffron – recruited by the Special Operations Executive and sent to occupied Belgium to discover how the Nazis have infiltrated SOE’s network – soon finds herself being hunted by Germany’s most ruthless spymaster.

Confronted by evil beyond their worst imaginings, the lovers must each make the hardest choice of all: sacrifice themselves, or do whatever they can to survive, hoping that one day they will be reunited.

Courtney’s War  is an epic story of courage, betrayal and undying love that takes the reader to the very heart of a world at war.

Now, if you’ve ever trolled the directory on this blog you might have noticed that one of the (many) genres I have a soft spot for is WWII fiction – especially when it features a strong female protagonist and clandestine elements like the SOE. So, naturally, when I say the blurb for Courtney’sWar on NetGalley I simply couldn’t resist hitting the request button.

Now imagine my delight when the romance between Saffron and Gerhard was not just that of two lovers separated by war, but that of star crossed lovers on opposites sides of the front line. Gerhard the German war hero, fighter ace, and decorated officer and Saffron the sharp, driven, SOE officer with a record most operatives world kill for (or die attempting to obtain). So dang good!

Right from the get go Saffron had all of the spunk and grit to pull the book along without the added bonus of the personal drama. I loved her mother’s connection to working as a spy, her privileged background, and her determination to be the best operative possible. I really enjoyed that the Courtney family history only played a small role in the story. There was just enough of it to let you know that there’s a larger narrative that this book belongs to, but not so much that you felt the need to have read any other books in the series. What I appreciated the most though, was how these did-bits were doled out gradually and at well-timed moments to add emphasis to actions and reveal motivations.

I also appreciated that while Saffron and Courtney were touted as the paragons of physical perfection, that their realities as people were almost fatally flawed. However, I almost expected Saffron’s lack of scruples about killing to cause more issues interpersonally, and Gerhard’s pretending to tow the Nazi line to culminate in a much different result. Don’t get me wrong though, I LOVE it when things turn out differently than I think they will – it means that the plot wasn’t predictable.

Perhaps the only thing that stopped this from being a 5 star review was that I found the language to be a touch too flowery. Had I encountered the type and frequency of the vocabulary used to embellish the text in a period romance I don’t think that I would have batted an eye. It just seemed a little out of place when set against the front line of WWII, SOE training and operations, and the internal workings of Baker Street. The only time that I didn’t take any notice was when Saffron was visiting her family in South Africa, where everything just seemed to fit. I can only chalk this up to the more colonial setting of Smith’s previous novels and the literary empire he has built out of the Courtney’s adventures in Africa.

I loved the drama, the breakneck pace, and the clear evidence of thorough research. While real people and events were referenced to throughout, I enjoyed that no fictionalized representations were made of the big players on either side, and that the characters presented were genuinely fictional with no obligation to mimic the history books. With that said though, I appreciated the detail that went into describing military maneuvers and campaigns, the specifics of the physical training endured by SOE trainees, and the repulsive descriptions of the meagre war-time food throughout.

Would I recommend this book? Most definitely. It’s gritty, gripping, and utterly uplifting. For those that love WWII fiction, treacherous spy games, and romantic paradoxes this baby will certainly be for you.

Many thanks to NetGalley, Wilbur Smith, David Churchill, and Net Zaffre for providing a copy in exchange for an honest review.