Today I am delighted to present an excerpt from Neila Young’s debut novel Brewing Up Murder. At just 205 pages this quirky, cozy murder mystery is the perfect accompaniment to a good cup of Joe. If you like a little family drama, the odd recipe thrown into the mix, and a little thrill without the squeamish bits of a psychological thriller this might just be the book fir you!

As the owner of Mystery Cup Café in Wilton, Missouri, a town made famous by a string of long-ago murders, Blake Harper is used to the mysterious. When her barista is found strangled in a mound of coffee beans, Blake vows to find the killer, even though her sister, the town’s lead police detective, tells her to stay out of it.

Blake finds plenty of suspects, like the owners of a rival coffee shop and the handsome new bookstore owner. But when new threats are made, she soon realizes the danger is centered around Mystery Cup and someone is targeting her personally.

Will Blake be able to solve the murder, find a new barista, and perfect her recipe for espresso brownies before she becomes the next victim?

After thirty minutes of munching on her popcorn and not paying any attention to The Bachelor group-date episode, Blake let out a sigh and looked at the clock on her DVR. Ten o’clock. Nikki should have already finished and gone home. “Well, I’m not going to be able to go to sleep until I make sure she got the inventory done. I might as well go check now so I can get a good night’s rest.”

Besides, it would only take her a few minutes to run down to the café and run back. She set aside her bowl of popcorn and reached for her sneakers. Ninja jumped off the couch in annoyance since he was no longer the focus of her attention. Blake reached for the remote and switched off the TV. She decided to drive rather than walk to the coffee shop in the dark, so she grabbed her purse and keys before heading out the door.

In five minutes, she was driving her blue Honda Civic down Main Street. When a streetlight went out overhead, she startled behind the wheel of her car. Every time a streetlight blinked off by itself when she drove by, it set her nerves dancing, especially when it was pitch black outside. She’d Googled why that sometimes happened and read something about how when a car’s headlights hit the light sensor on a streetlight just right, it will go out. Still, she’d had so many discussions about ghosts in this town that it still gave her the heebie-jeebies.

When she pulled up in front of Mystery Cup, she was surprised to see that the lights in Macabre Reads were still on. Large sheets covered the windows, so she couldn’t see in. For a moment, she thought maybe Sean had forgotten to shut them off. Then a silhouette crossed the front window, but it was gone so quickly, she wondered if her mind was playing tricks on her. “I guess he’s working late,” she mumbled.

Oh well, she didn’t have time to worry about Sean Larson or about how incredibly hot he was, all sculpted lines and dimples. No, she just wanted to do a quick inventory check and go home.

Pulling her keys from the ignition, she stepped out of her car and looked around. The night seemed eerily silent. Usually there was some sort of noise, whether it was from people on the street, music coming from the high school a few blocks away, or even crickets chirping. But there was just… emptiness.

With a shiver, she unlocked the front door of the coffeehouse and slipped inside. When she turned to disarm the security system, her ire rose. It hadn’t even been set. Not only that, but the kitchen lights had not been turned off, either. The small round window in the kitchen door was brightly illuminated, and she heard her mother’s voice in her head. “Someday, when you have to pay the electric bill, you’ll understand why I’m always telling you to turn off the lights.” She cast her eyes skyward. “I get it, Mom. No need to haunt me.”

The sound of a cup shattering in the kitchen caused Blake to nearly jump out of her skin. What on earth? What is Nikki still doing here?

“Nikki? Nikki, is that you?” She walked around the front counter and headed toward the kitchen door. The air seemed to still for a moment before she heard heavy footsteps and the back door slam shut.

Her brow furrowed as she reached the kitchen door. “Nikki?” She pushed open the door. When she walked in, she noticed immediately that the big latch that normally secured the back door was unlocked—and the place was a mess. A few mugs were broken on the floor, and several bags of coffee beans that Derek had delivered that afternoon were ripped open and dumped out, coffee beans strewn everywhere.

“Oh my God,” she breathed, stifling a harsher curse. The industrial kitchen island that took up most of the space in the center of the room separated her from the shelves holding the numerous bags of coffee beans. She slowly walked around the island, surveying the damage. Why would someone break in and just start dumping out coffee beans?

Halfway around the island, all of Blake’s thoughts stopped. Everything stopped. On the floor, half-buried in coffee beans, lay Nikki. Her body was contorted at a weird angle. Her glazed brown eyes stared at the ceiling, unseeing, and the skin on her neck was an angry red.

Blake didn’t have to check the girl’s pulse to know that Nikki was dead. 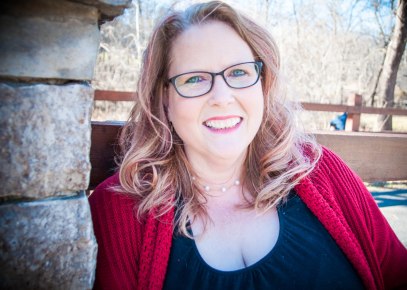 Neila Young is a Midwestern girl and a lover of coffee, live music, and horror movies, not necessarily in that order.

Writing (and reading) mysteries are Neila’s passion, and she approaches each day by thinking, “everything is a story.” She has been writing all her life and can’t remember a time when she wanted to do anything else. She loves to take notes and spin tales about the quirky characters she meets, and she has found that she can create some great stories by asking “what if” and “suppose that…”

Neila studied journalism at the University of Kansas then spent many years suffering the trials of corporate America, writing about everything from financial risk management to software user manuals to website copy about radiators (sadly, that’s not a joke). She finally decided to take the plunge and write the cozy mysteries she loves so much, complete with recipes!

When Neila is not writing, she’s probably hanging out at a coffee shop or fighting evil with the help of her very supportive husband, two awesome children, who constantly ask to have characters named after them, and the most lovable dog in the world, Dizzy.

One thought on “#Excerpt: Brewing Up Murder by Neila Young”